The SE CASC has created a six-part webinar series designed to help our partners and stakeholders in the Southeast more readily access the large amount of information synthesized in the Fourth National Climate Assessment Volume II (NCA4). We will highlight the key messages contained in the Southeast, Tribes & Indigenous Peoples, & U.S. Caribbean chapters of the NCA4, connect you directly to related elements of the volume, and make connections to relevant research, publications, and data from the SE CASC and others. We have developed pdf versions of NCA4 figures, for ease of downloading, which are linked throughout this guide.

“Many southeastern cities are particularly vulnerable to climate change compared to cities in other regions, with expected impacts to infrastructure and human health. The vibrancy and viability of these metropolitan areas, including the people and critical regional resources located in them, are increasingly at risk due to heat, flooding, and vector-borne disease brought about by a changing climate. Many of these urban areas are rapidly growing and offer opportunities to adopt effective adaptation efforts to prevent future negative impacts of climate change (very likely, high confidence).”

Potential impacts to urban infrastructure and health risks in the Southeast:
– rapid population shifts and climate impacts on urban areas
– increasing heat, an increase in the rate of vector-borne diseases
– decreased air quality resulting in additional risks to human health
– an increased vulnerability to existing infrastructure, including roads, bridges, and properties.

Evidence, Likelihood, and Confidence for Key Message 1
Evidence of impacts to the Southeast are supported by the geography of the region, which contains a large number of cities located at or below sea level at an increased risk of flooding. Additionally, the natural climate of the Southeast provides a conducive atmosphere for health issues including the spread of disease. Uncertainties include population projections, shifts in immigration or migration rates, and shifting demographics. See more.
Figure Downloads from Key Message 1:

Note that each figure on the NCA4 website has an eyeball icon associated with it that gives users access to detailed metadata. This can be used to recreate the figures and accurately portray the findings. Some figures have a gear icon that directs the reader to the Climate Resilience Toolkit, a powerful resource with hundreds of case studies and a Climate Explorer tool that allows folks to explore dozens of climate parameters at the zip code level. 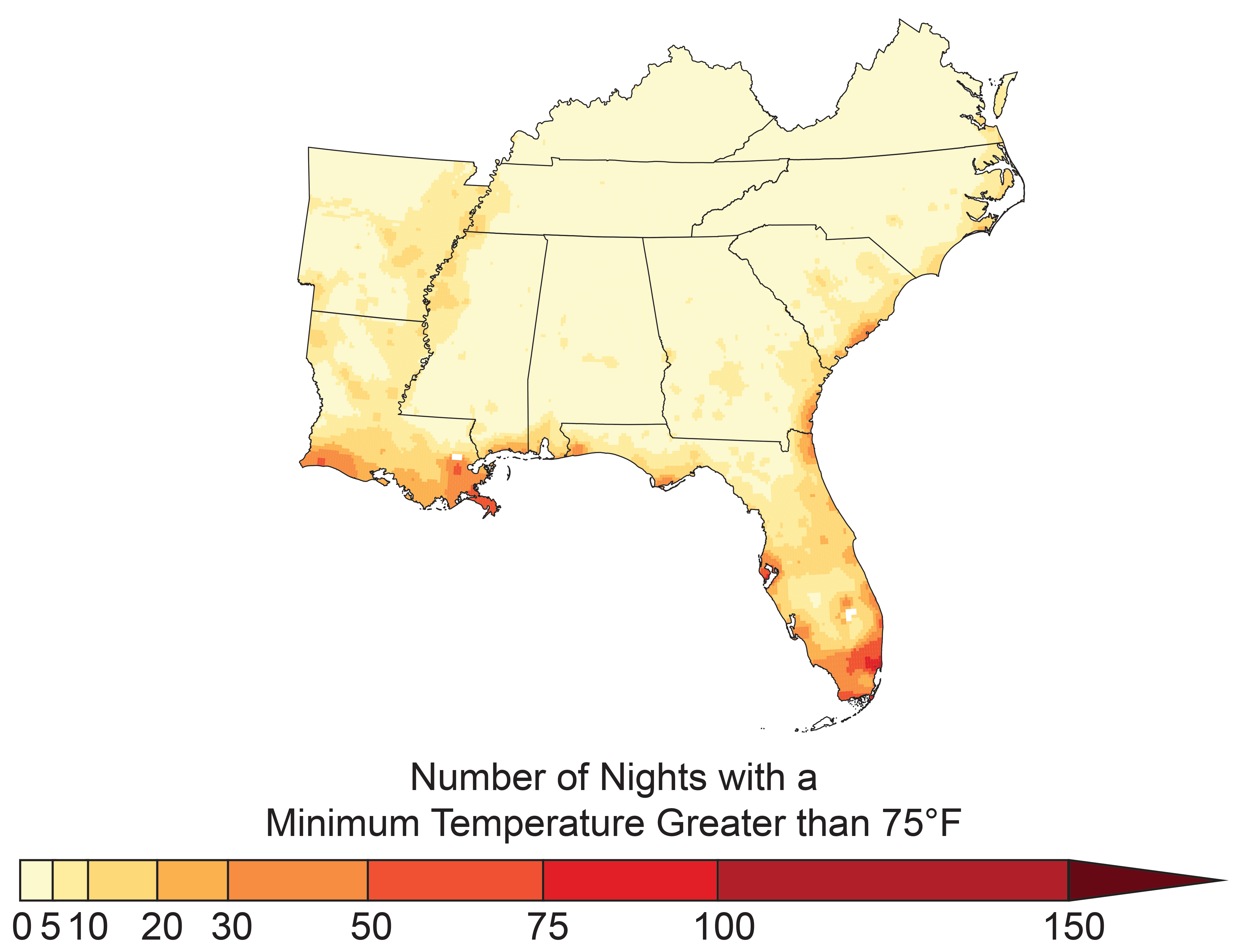 Figure 19.4: Historical Number of Warm Nights (left) depicts the historical number of warm nights per year in the Southeast (days with minimum temperatures above 75°F). This is based on model simulations averaged over the period 1976–2005. Exposure to high nighttime minimum temperatures limits the ability of some people to recover from high daytime temperatures, which can result in heat-related illness and death. The number of warm nights per year is projected to continue increasing, as shown in Figure 19.5.
(Link to Figure 19.4 | Downloadable PDF)

Projected Number of Warm Nights (right) depicts the projected number of warm nights in the Southeast based on RCP scenarios 8.5 and 4.5. The predictions are for mid and late 21st century, illustrating change over time.

Representative Concentration Pathways (RCP) are scenarios representing a time series of various forcings that have an effect on the global climate (eg. greenhouse gas emissions & concentrations, aerosols, land use/ land cover). RCP 8.5 corresponds to a high energy demand and high GHG concentration in the absence of climate change policies. RCP 4.5 assumes that GHG emissions will peak around 2040, then decline, resulting in a less harsh forecast than RCP 8.5.
(Link to Figure 19.5 | Downloadable PDF) 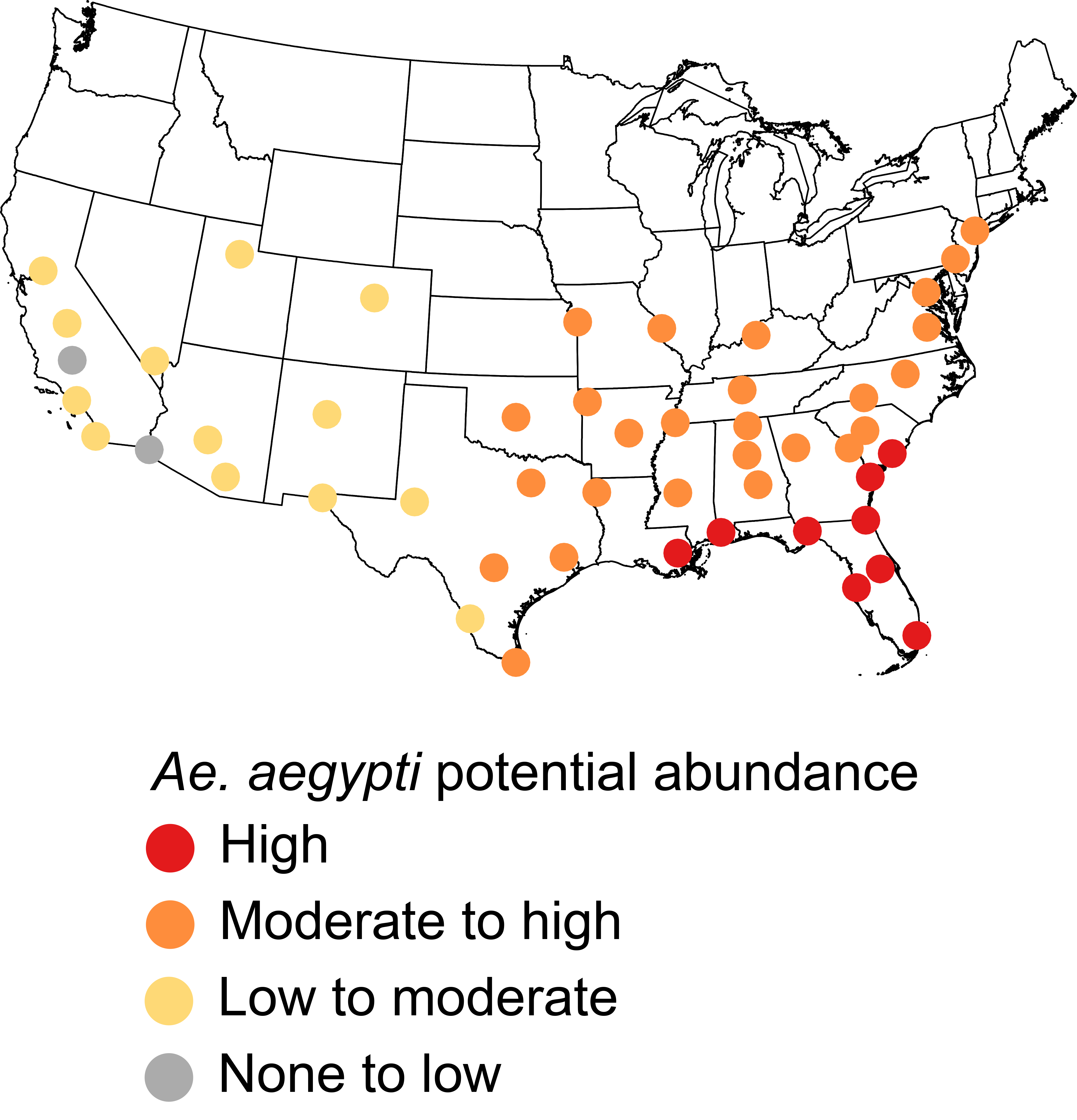 Figure 19.6: Potential Abundance of Disease Carrying Mosquito (left) depicts the current habitat suitability for the Aedes aegypti mosquito in July for 50 cities. Warming temperatures have the potential to expand mosquito habitat and disease risk. The Aedes aegypti mosquito can spread several dangerous diseases, specifically dengue fever, chikungunya, and Zika fever. Due to the higher population densities and other human factors (man-made structures that pool water and serve as breeding grounds), these vector-borne diseases pose a greater risk to urban areas than rural. As shown, the southeast is the region of the country with the greatest potential abundance of mosquito activity.
(Link to Figure 19.6 | Downloadable PDF)

SE CASC researcher Adam Terando published a research article that directly contributed to this chapter titled “The Southern Megalopolis: Using the Past to Predict the Future of Urban Sprawl in the Southeast U.S.” Learn more about the project it derived from here.

View a Guide to Understanding the Southeast Chapter of the NCA4