The Southeast CASC is hosting a six-part webinar series designed to help our partners and stakeholders in the Southeast more readily access the large amount of information synthesized in the Fourth National Climate Assessment Volume II (NCA4). We will highlight the key messages contained in the Southeast, Tribes & Indigenous Peoples, and U.S. Caribbean chapters of the NCA4, connect you directly to related elements of the volume, and make connections to relevant research, publications, and data from the Southeast CASC and others. 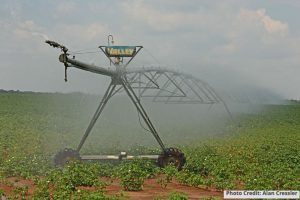 56% of land in the Southeast is rural, or nonmetropolitan, and 16 million people live in these areas. Many residents of rural communities maintain a connection to traditional livelihoods, relying on the natural resources found in the region which are inherently vulnerable to climate change. Rural economic sectors, such as agriculture and forestry have already been impacted by climate change due to extreme temperatures and drought and this trend is projected to continue, further impacting human health and labor productivity. While adaptation and mitigation measures can moderate climate change impacts, rural areas generally face additional limitations, such as poverty and limited access to healthcare, which will make coping to climate-related challenges more difficult.
For more detail related to this Key Message, also see:
– NCA4. Ch. 10: Agriculture and Rural Communities
– NCA4, Ch. 6: Forests
Figure Downloads from Key Message 4:
Note that each figure on the NCA4 website has an eyeball icon associated with it that gives users access to detailed metadata. This can be used to recreate the figures and accurately portray the findings. Some figures have a gear icon that directs the reader to the Climate Resilience Toolkit, a powerful resource with hundreds of case studies and a Climate Explorer tool that allows users to explore dozens of climate parameters at the zip code level. In addition, we have created and linked pdf versions of each figure below for ease of saving the image with the associated legend.
CASE STUDY:
Mountain Ramps
The Cherokee have been harvesting ramps, a wild onion (Allium tricoccum), in the southern Appalachians, their ancestral homelands, for thousands of years. Collecting ramps for food sustenance is only one aspect of this cultural tradition. The family-bound harvesting techniques are equally as important and make up part of the deeply held tribal lifeways (Ch. 15: Tribes, KM 2). Ramps emerge in springtime and provide important nutrients after a long winter with a dearth of fresh vegetables. These plants grow in moist forest understory areas that are sensitive to temperature and soil moisture.  In the southern Appalachians, ramps are threatened by two major processes: overharvesting pressures and a changing climate that could expose these plants to higher temperatures and lower soil moisture conditions during sensitive growth periods (Ch. 10: Ag & Rural, KM 1). 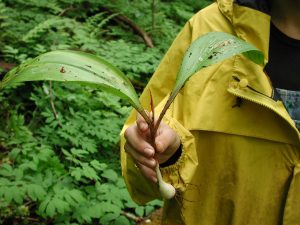 Although ramps are found all along the Appalachian mountain range, on Cherokee ancestral lands, they are already in their southernmost range. Climate change thus acts to increase the vulnerability of this plant to the existing stressors.
Figure 19.20: This up-close image of a ramp (Allium tricoccum), harvested from the wild, shows leaves and the bulb/corm of the plant.
Photo credit: Gary Kaufman, USDA Forest Service Southern Research Station.
(Link to Figure 19.20 | Downloadable PDF) 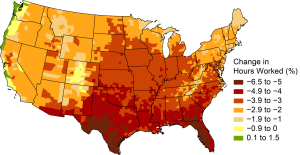 This map shows the estimated percent change in hours worked in 2090 under a higher scenario (RCP8.5). Projections indicate an annual average of 570 million labor hours lost per year in the Southeast by 2090 (with models ranging from 340 million to 820 million labor hours). Estimates represent a change in hours worked as compared to a 2003 & 2007 average baseline for high-risk industries only. These industries are defined as agriculture, forestry, and fishing; hunting, mining, and construction; manufacturing, transportation, and utilities.
Source: adapted from EPA 2017. (Link to Figure 19.21 | Downloadable PDF) 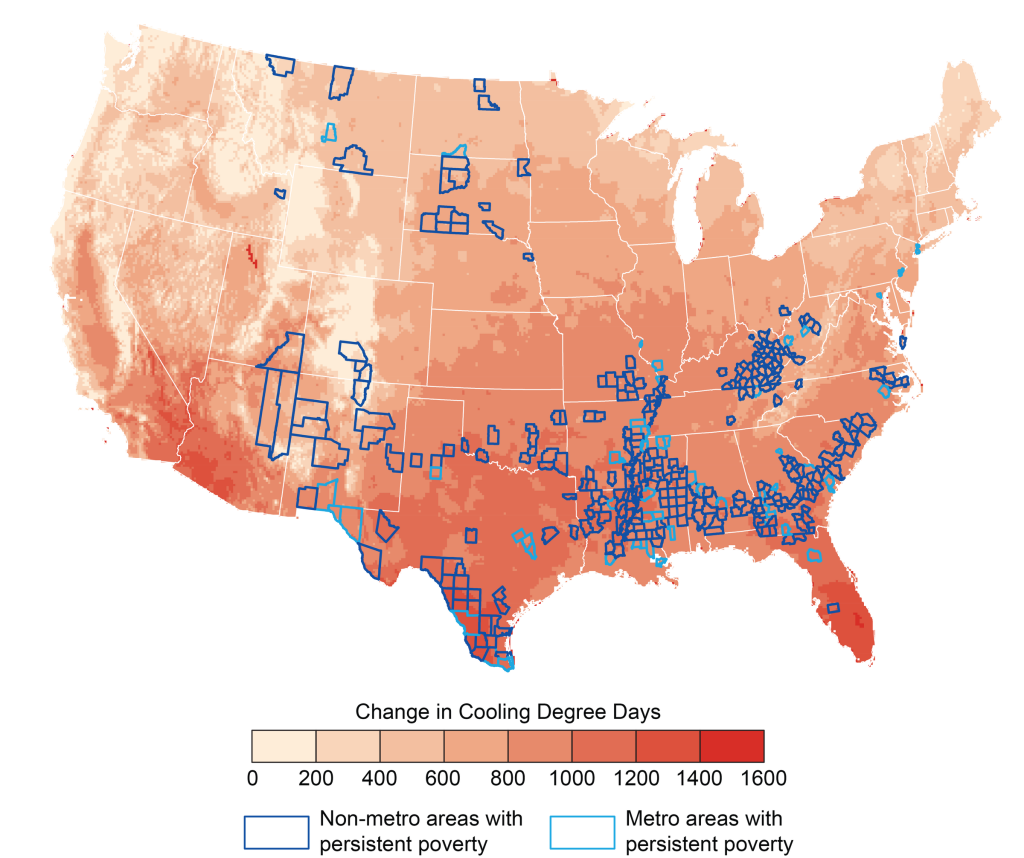 The map shows projected changes in cooling degree days by the mid-21st century (2036–2065) under the higher scenario (RCP8.5) based on model simulations. Rural counties experiencing persistent poverty are concentrated in the Southeast, where the need for additional cooling is expected to increase at higher rates than other areas of the country by mid-century.
Sources: NOAA NCEI, CICS-NC, and ERT, Inc. (Link to Figure 19.22 | Downloadable PDF)

Evidence of impacts to the Southeast are supported by the geography of the region, which contains a large number of cities located at or below sea level at an increased risk of flooding. Additionally, the natural climate of the Southeast provides a conducive atmosphere for health issues including the spread of disease. Uncertainties include population projections, shifts in immigration or migration rates, and shifting demographics. See more.

SE CASC funding and researchers have implemented projects relevant to this Key Message:

View a Guide to Understanding the Southeast Chapter of the NCA4